It all started when I found a rust hole, big enough to put my head through in my XLDT, it wasnt safe or reparable so it had to go and i needed another car. As i'd spent loads on the XLDT I decided to get another 306 and i could swap all the good bits.

I got onto e-bay and found this beasty in bridgend, at £350 it was worth a visit. the pics on e-bay were poor and when i got to the car i could see why he hadn't used his best camera. it had a dents in every panel, 202,000miles on the clock, bits of trim missing, rust on the roof, then the fault list came, cracked screen, electric windows and sunroof didnt work, wipers were faulty, central locking was faulty, it smelled like a damp dog had been living in there and the clutch was pretty heavy too. But, it ran fine so i gave him £275 and took it off him.

Once home, first swap was the alloys to stop a major vibration, but that didnt work! It was nicknamed 'the bone shaker' by the boys and it vibrated for about 6 months unitl i changed a driveshaft and it was fixed!! 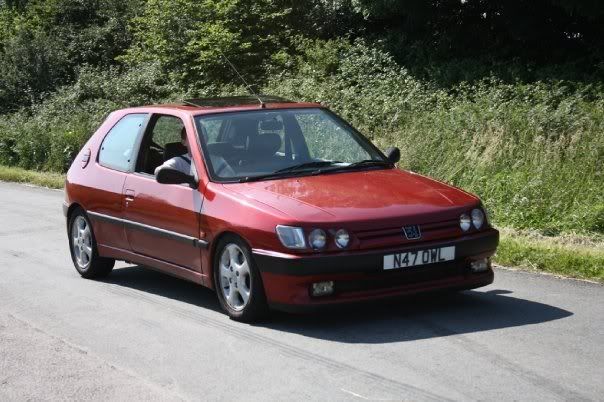 I changed nearly everything in those early months, found and fixed all the electric faults and also upgraded the brakes to XSi and XSi rear beam with discs. all that hadnt been done was the interior, so back to e-bay to find it.

I came across a black S16, with the bottom end on its way out, 1 owner, well cared for and only £200! bargain for a mint half leather and red interior and i could sell the rest, we drove to exeter in the 306 and planed to bring the S16 home but it had other ideas. too heavy to tow and a engine that wasnt gonna make it home we abandoned in in a dodgy hotel/petrol station. 4 days later (after my mate had got over his toothache) we went to get it with a land rover and trailer. 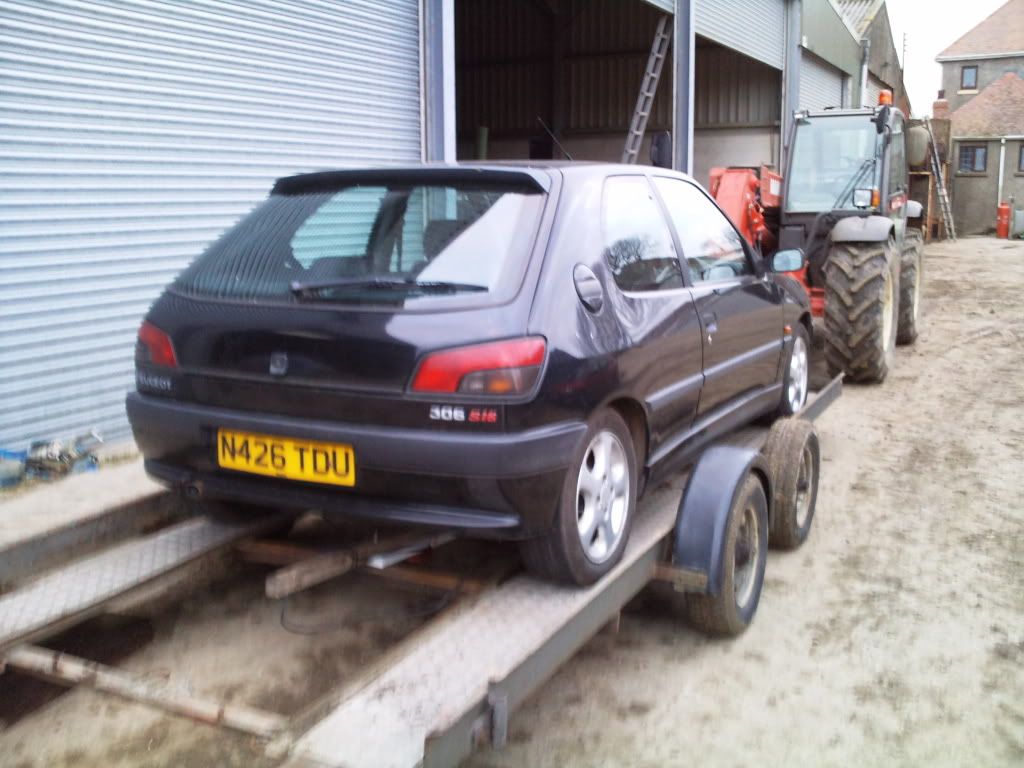 A night alone with both cars and id swapped the wheels and full interior, seats, switches, all trims (mine were filthy from the previous owner) head lining, jesus handles - everything! she was now a good looking car, and due to the previous vibrations most of the dents had somehow shaken out too! There was nothing else to do! 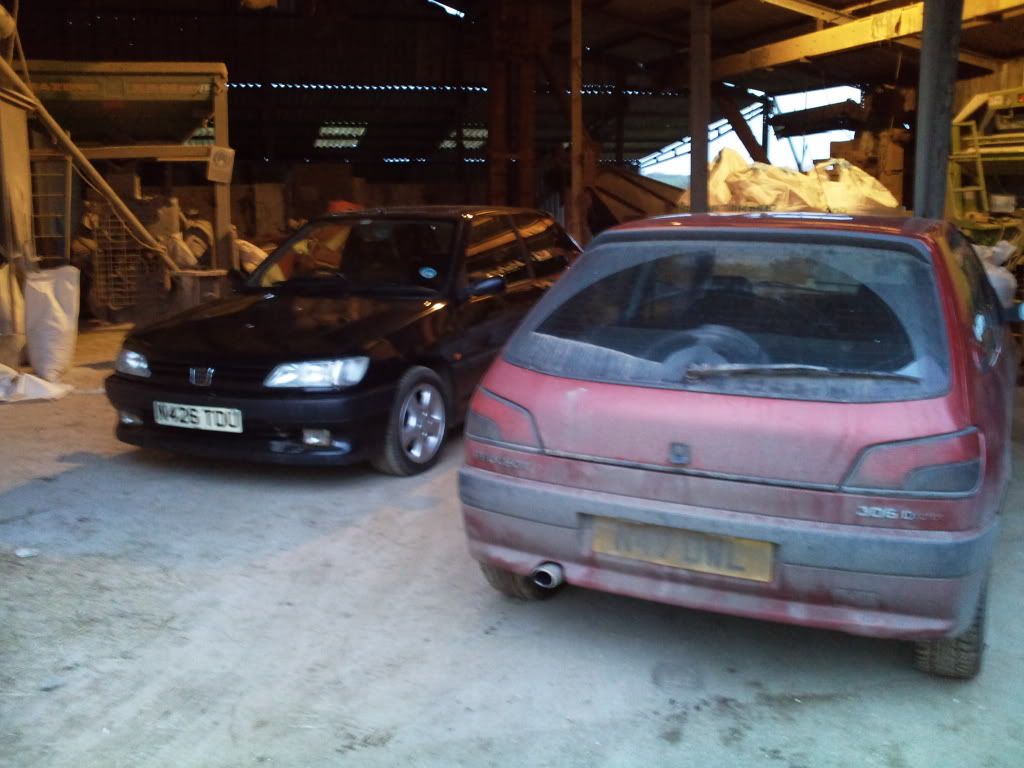 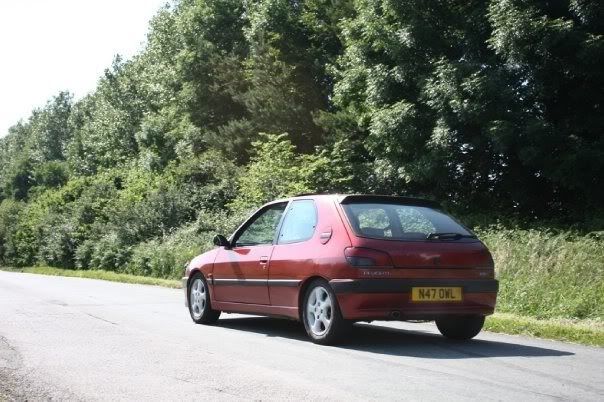 Then i said something i shouldn't have and i was stood next to the car at the time. I said, 'i've changed everything, theres nothing else to go wrong'.

morettes do suit a phase 1 i must say.

I paid £140 for them off e-bay. they do look better than the standard lamps and are better in the dark too.

Much plans for it?

the blog aint finished yet, gotta take a few more photos. Fmic and engine rebuild are the main things.

Back to the Red Shed story, i also mentioned, while in ear shot of the car, it was the only 306 (out of the 3 i had) that handn't arrived at the farm on the trailer. The next weekend up while up in London with the missis and spending lots of money we were heading back to the hotel when the water trap light came on, i'd never seen it b4 and thought it was a bit odd, then all the lights came on! the horn was blairing, and the car cut out. i managed to get off the main road and stop in a side street. I popped the bonnet and as i lifted it the stop solinoid was clicking so fast i thought it would explode! the starter was still engaging and trying to fire back up and then came the smoke! Pouring fron the drivers front of the car i tore out the indicator to see the wireing in the wheel arch was on fire. I treid blowing it out but it it wouldn't. I had no tools so i grabbed the battery lead and tried to pull it off the battery, it was boiling and i ended up snapping it off the starter and alternator, now the fire ad spread to the other side of the car. Fire engine was called but i manged to put it out about a minute b4 they arrived. Then the 306 had it's ride on the trailer back to the farm.

While the front was stripped down and a wiring loom from a 98 d-turbo was on order and to add insult to injury, some1 broke into the workshop and nicked the tools and the only set of keys for the Red Shed. It was about 3 months until i got here back on the road, i had to wait for the insurance to pay up, buy new tools, change all the locks, fit the new loom and fit my front mount intercooler.
All was fine and she was up and running and with a few tweeks to the pump it was pretty quick too.

recently tho I found another red D-turbo in good condition with a blown head gasket, plan was to swap the doors, cenral locking loom, boot and wings with mine and re-build the engine for mine. within 2 weeks of buying the car, the Red Shed done the head gasket too, (attention seeking). As I write this she's sat down the farm with the engine out and the front end off, with a half re-built engine in the workshop. i'll get some pics up soon.

The Rebuild.
From this; 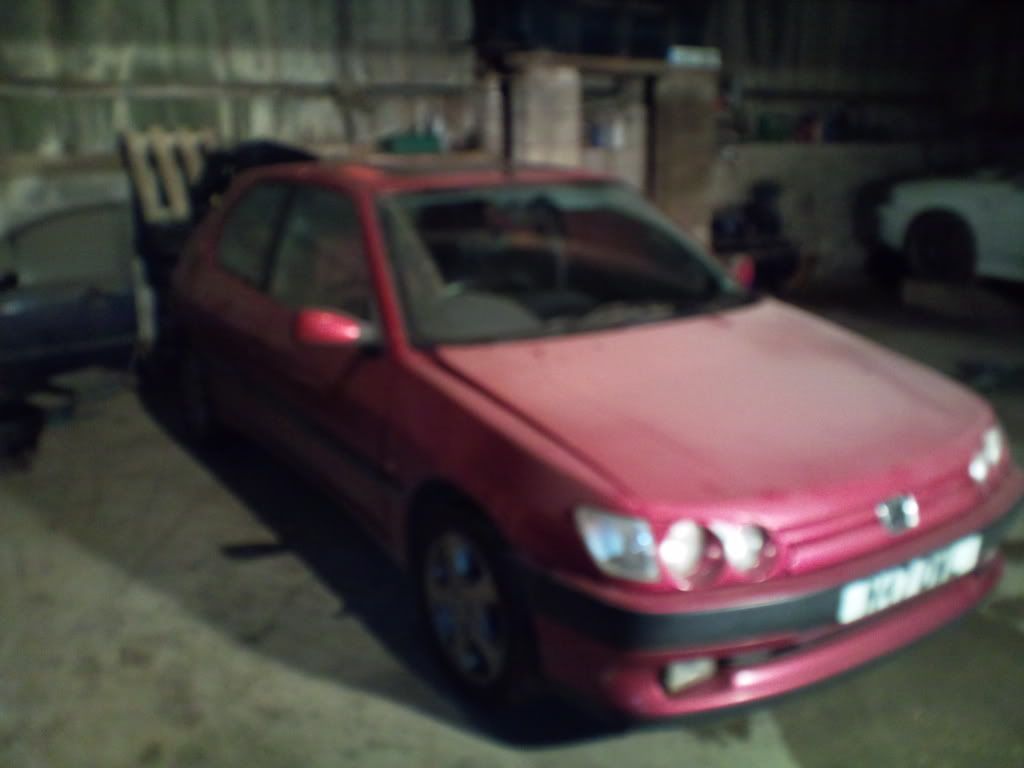 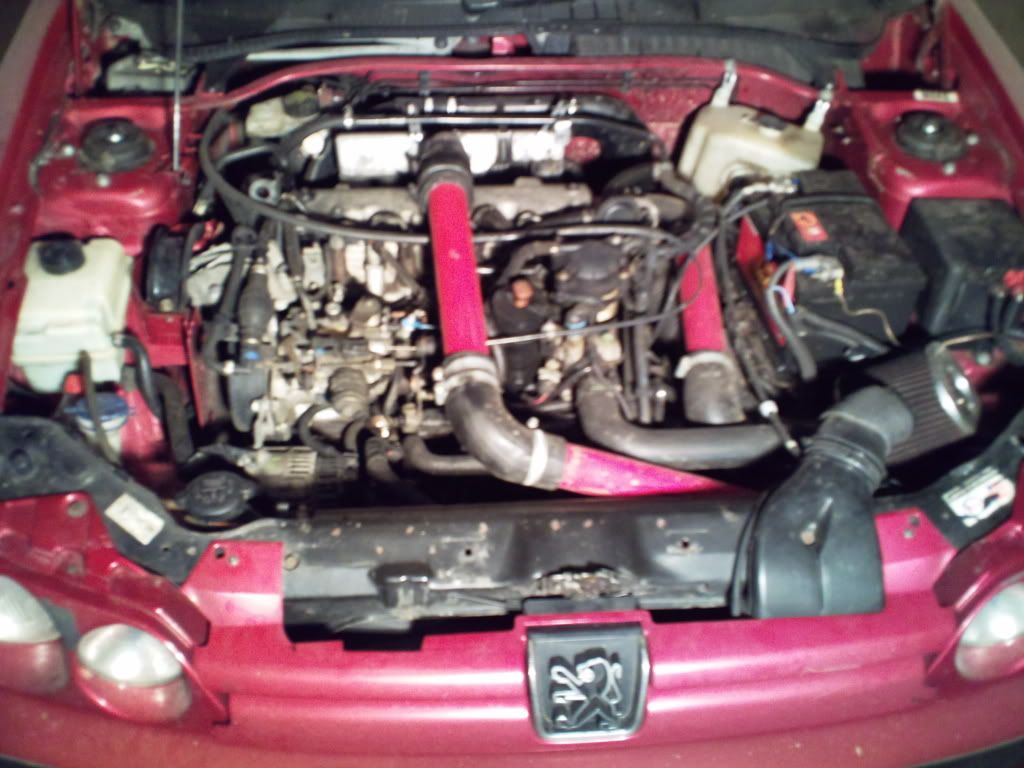 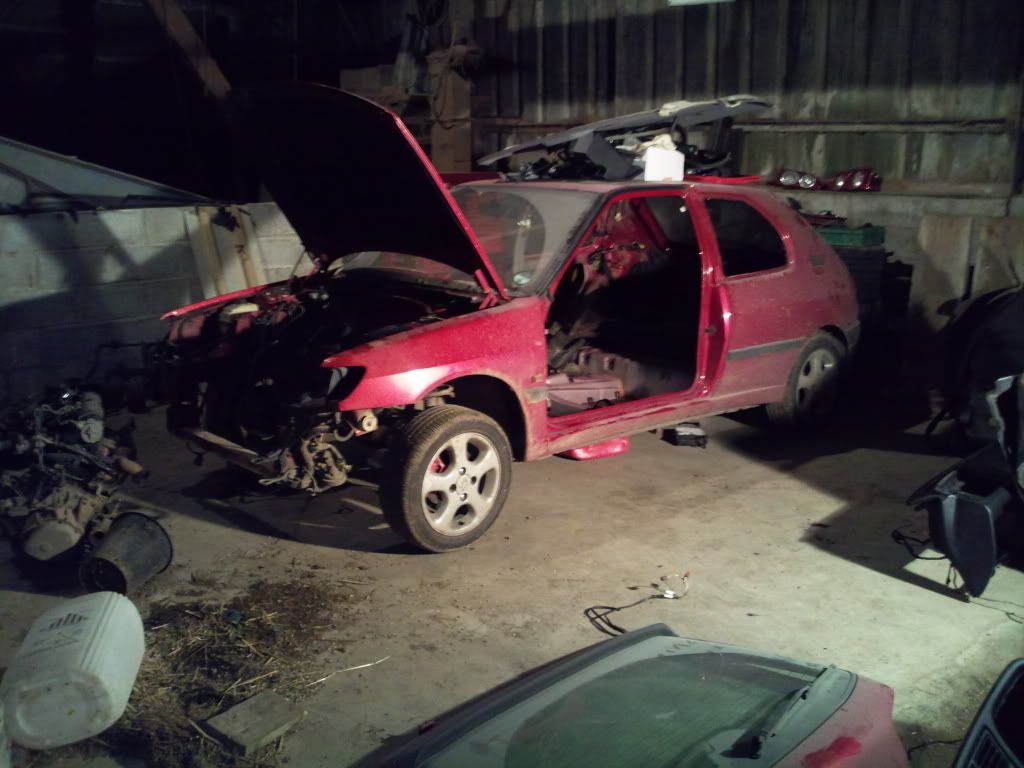 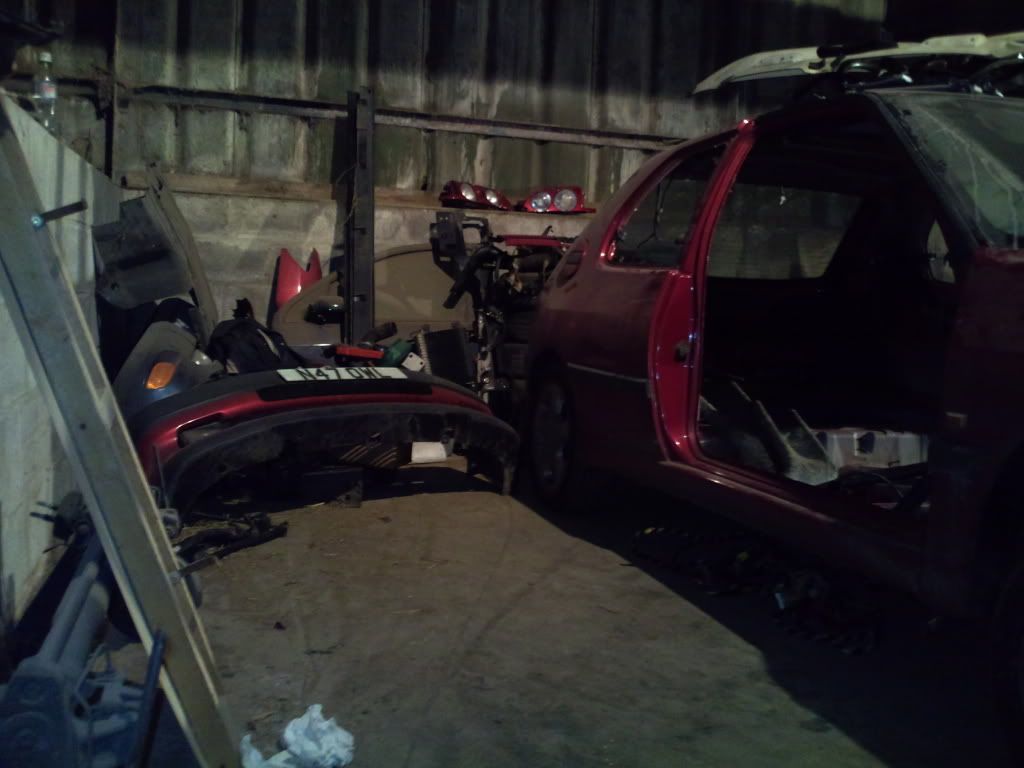 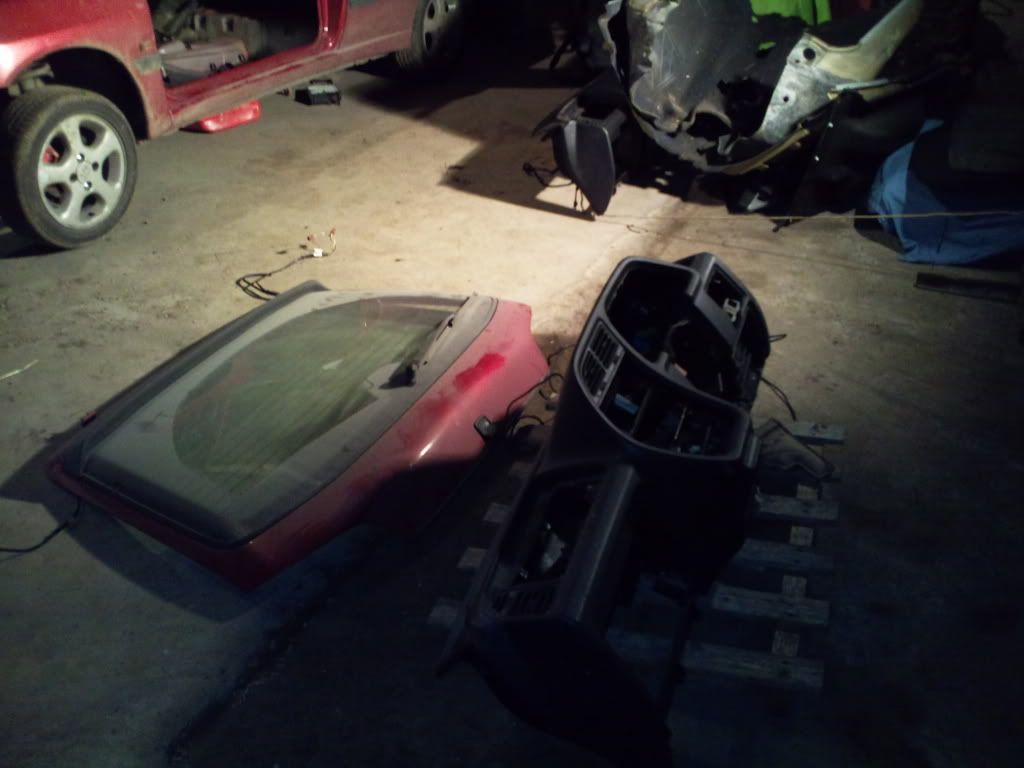 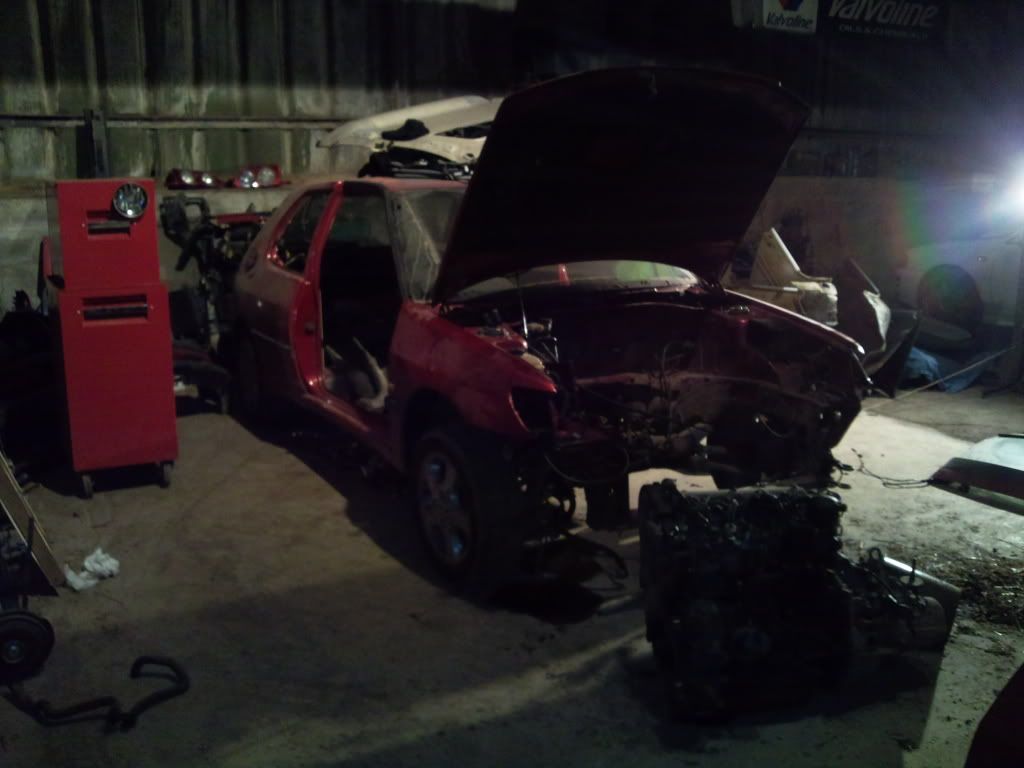 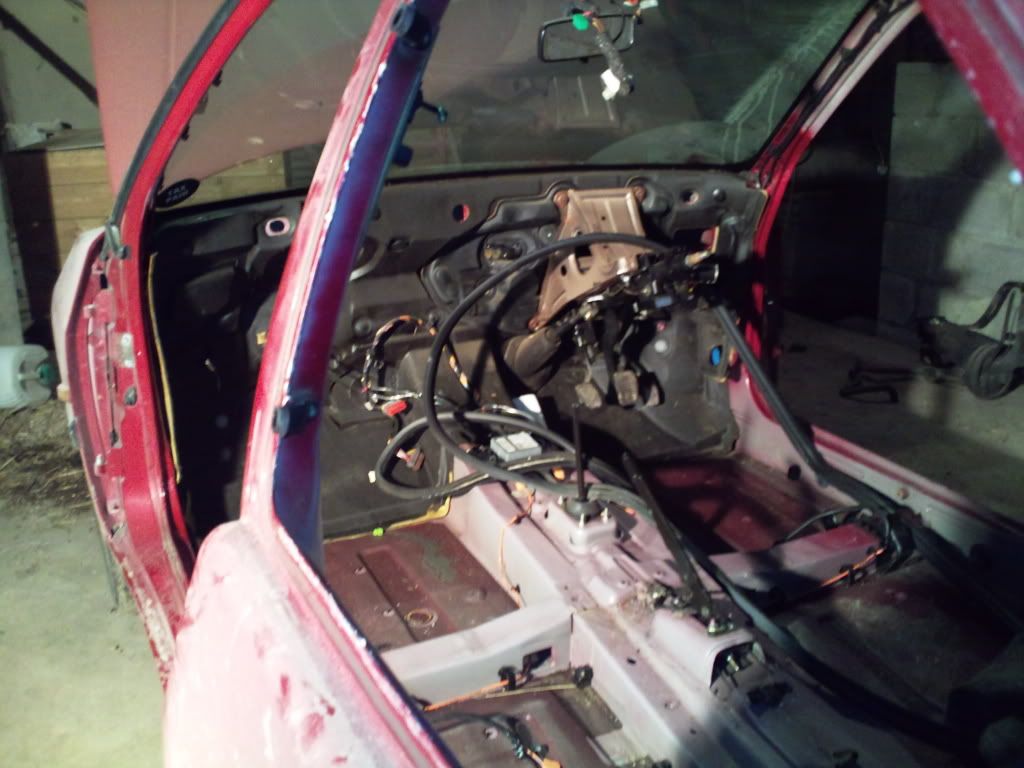 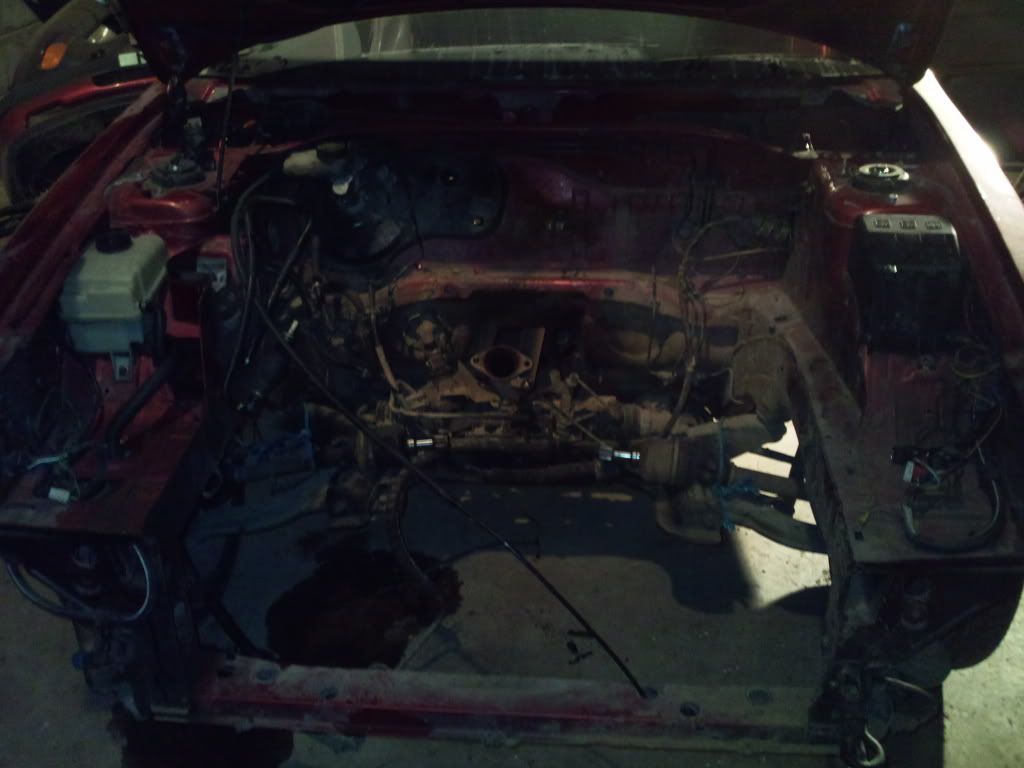 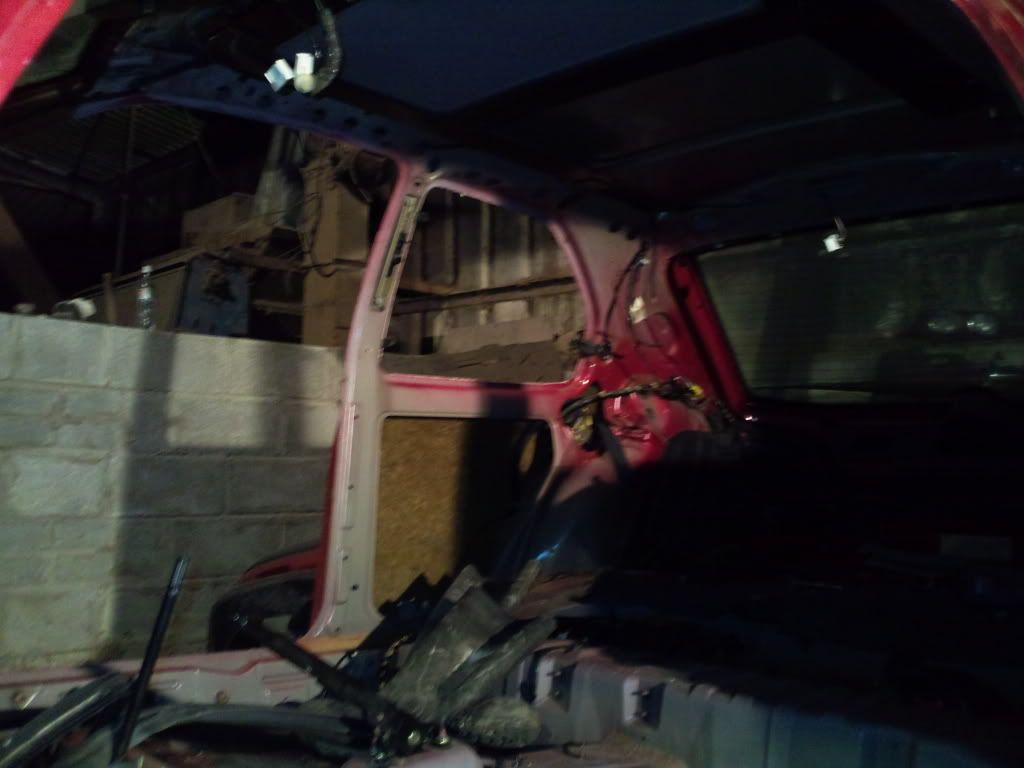 Thats the good one! the scrap 1 looks the same but with no wheels.lol

is there a tidy windscreen in the scrap 1?

It was ok but the car got pick up yesterday, i got a new screen for mine, about £85 fitted. they wanted £65 to take 1 out of my old 306 and put it in mine and couldn't garranty that they wouldn't break it. so i went for the new 1.

where you getting that?

It was a while back, i think it was welsh windscreens or cardiff winscreens. it was a local company and they came out to the car. have a look through your local yellow pages, i did get quotes of over £200! but found a that cheap one then.

yeah will have to look in the new year, i'm keeping an eye out on ebay for old stock there have been a few with sensors going for £60 delivered

Cheap as chips every time i've used them

This what was left of the spares car 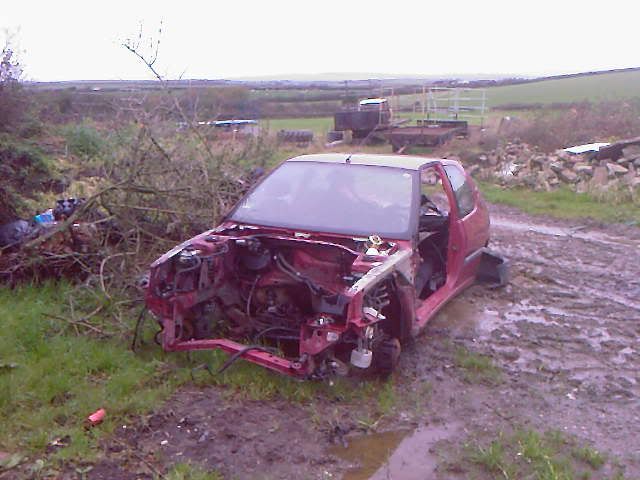 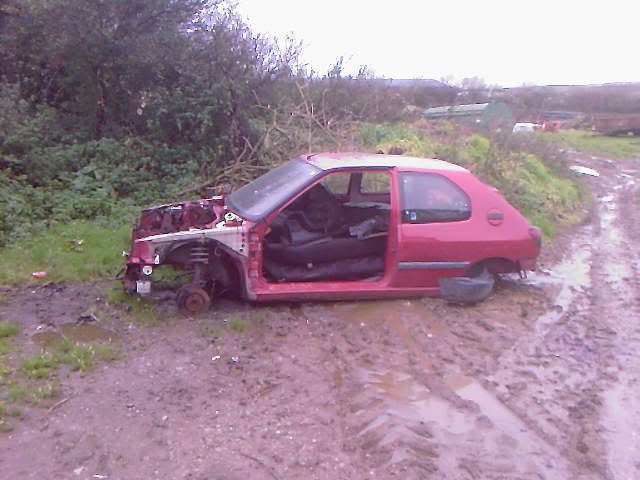 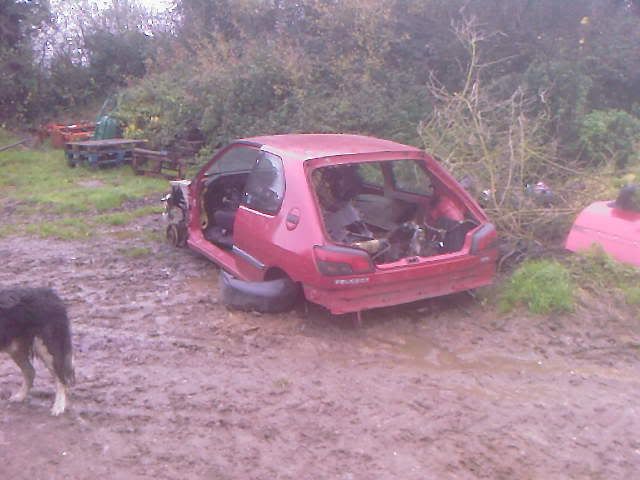 the engine build.
after a good strip down it looked alot better 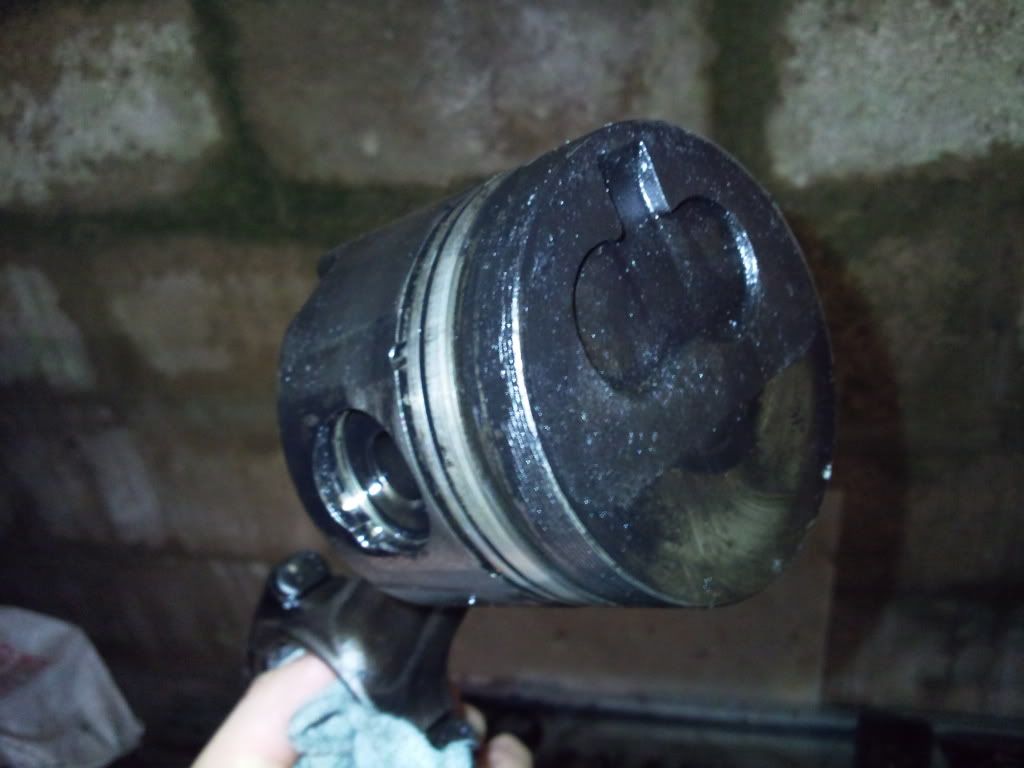 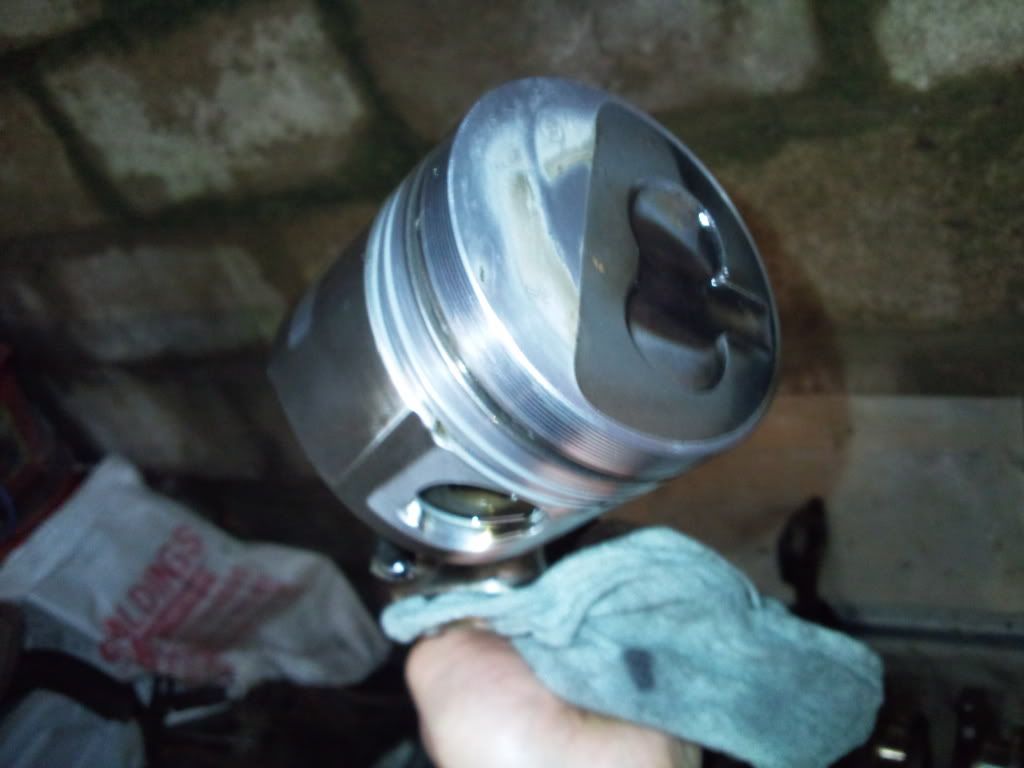 cleaned up the block; 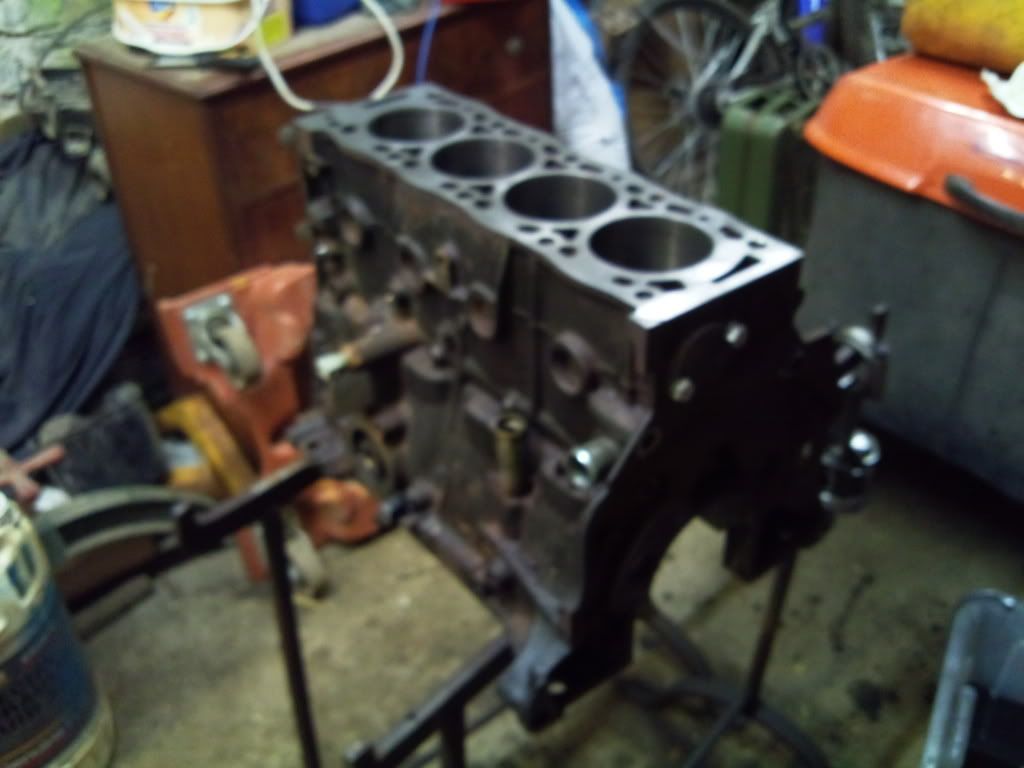 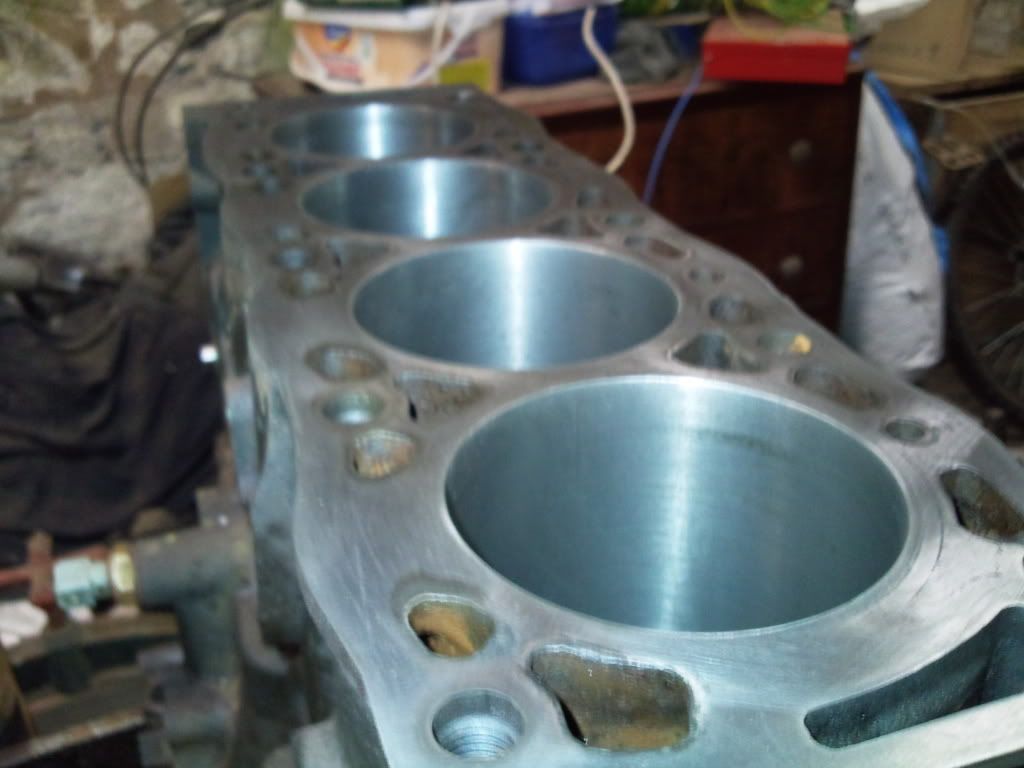 didnt have any pics of the pistons going in but it had all new bearings, rings and seals and some paint! 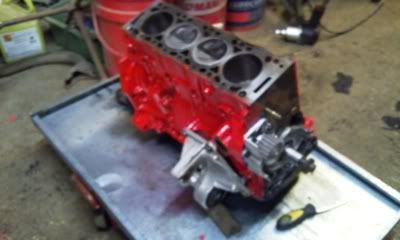 looking good, shame about the lack of petrol

i get 450, just over if i'm gentle, but i have the advantage of nice sound and being able to rev

Page 1 of 2
Permissions in this forum:
You cannot reply to topics in this forum
Club Membership
Click above to buy 12 months Club membership for £5 which includes a free pair of window graphics, Please PM Simon stating colour wanted
Log in
Latest topics
» Happy Christmas - 15% Off Everything
by oilman Thu 24 Dec 2015, 23:34

Who is online?
In total there are 5 users online :: 0 Registered, 0 Hidden and 5 Guests