heres my new car, first frenchie, so dont know my way round it that well :/, im a quick learner though so shouldnt be too bad.

its a Sreg 306 2.0 dturbo..currently on 174k but going to rise sharpish as i do a fair amount of driving,
bought it on sunday, drove from llanelli to cardigan without a hitch, pulls well and drives nice and straight, the only thing im not to keen on is the fact the steering rack is pretty slow, a lot of steering wheel movement for not much wheel movement, my old fiesta had a quicker rack, and used to jus go with a little input, but hey ho, im sure ill get used to it

few problems with it, as with any car, the drivers side electric window doesent work, theres power to the switch but no power to the motor ( i think) so im gna pull the doorcard off tomorrow and have a gander,

the rev counter only works when it feels like it, till it gets tired and then stops working again! maybe an electriacal fault, but again, i need to check that tomorrow aswell

3rd and 4th have a slight scrape into gear, 3rd is considerably worse, ive been told it was the syncros in the box, BUT, after driving it, it feels like the clutch cable has stretched, and isnt quite disengaging the clutch, im going to throw a cable on it sometime soon and see if that cures it,and top it up with box oil, if not then it will be new box

the back axle mounts need doing, but these have been supplied and will be getting done next week, so no problem, jus a knock from the rear occasionly.

and theres a leak from the bottom hose on the rad, had a load of radweld thrown in, and that seemed to have slowed it to a drip for now, so ill be sorting that this week

bearing in mind, this was pretty cheap, the bodyworks pretty clean for the age/milage, i cant really complain!

the old one wouldnt tune to radio1 and had horrible quality, got my sony in there now, so i can connect my iphone to it and bang my tunes out

ive bought some cyclones aswell, they will be going on next week when i get time

then its a mild touch with the lowering stick, adjust the fueling and turbo, and enjoy it

im sure there will be more ideas/things i end up doing, but for now thats what i have planned.. 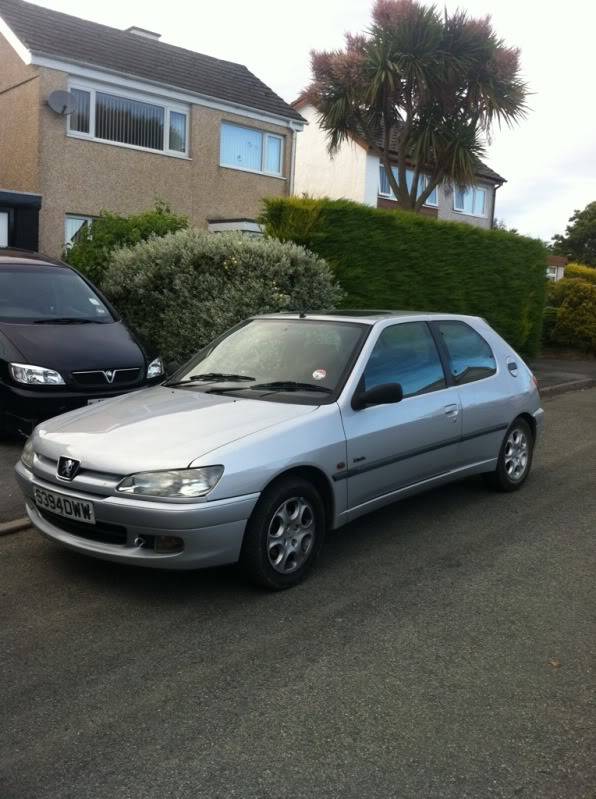 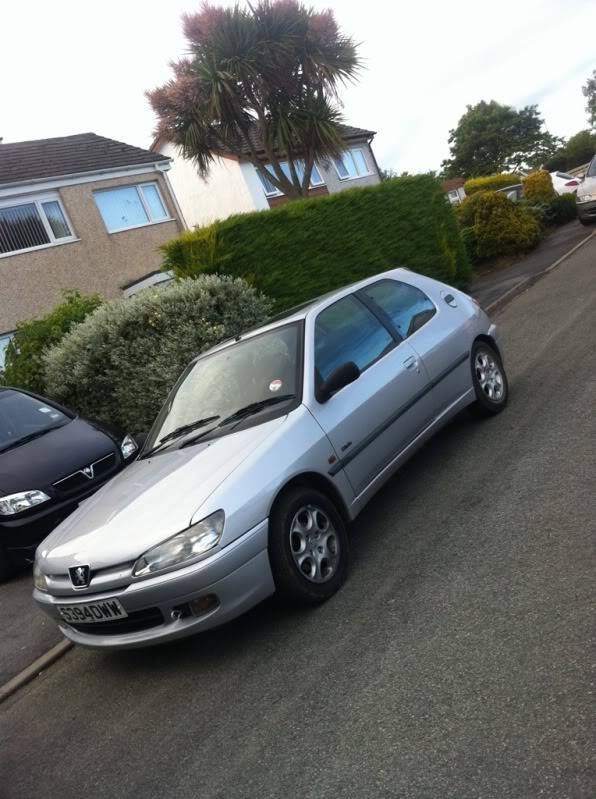 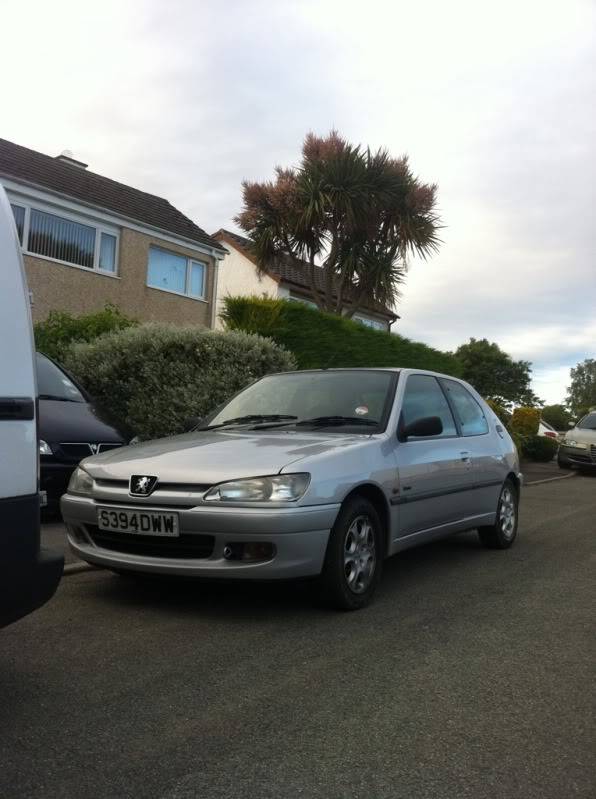 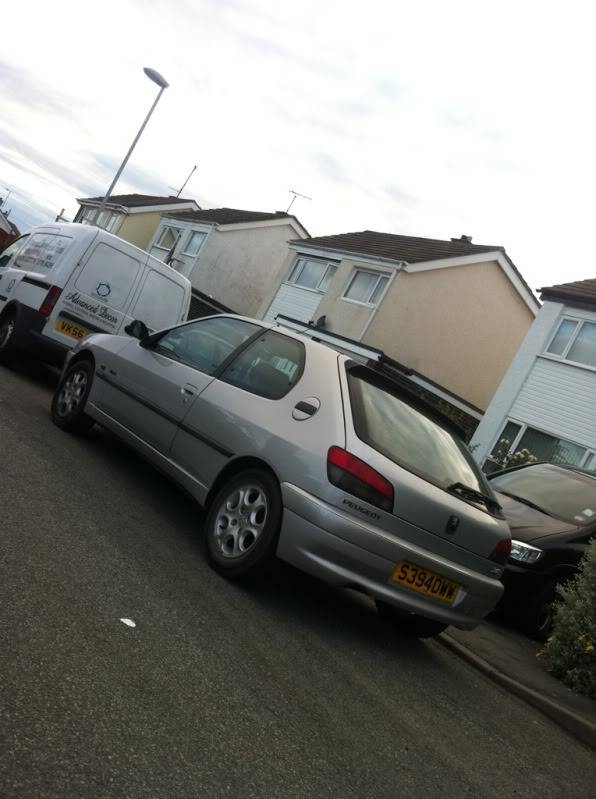 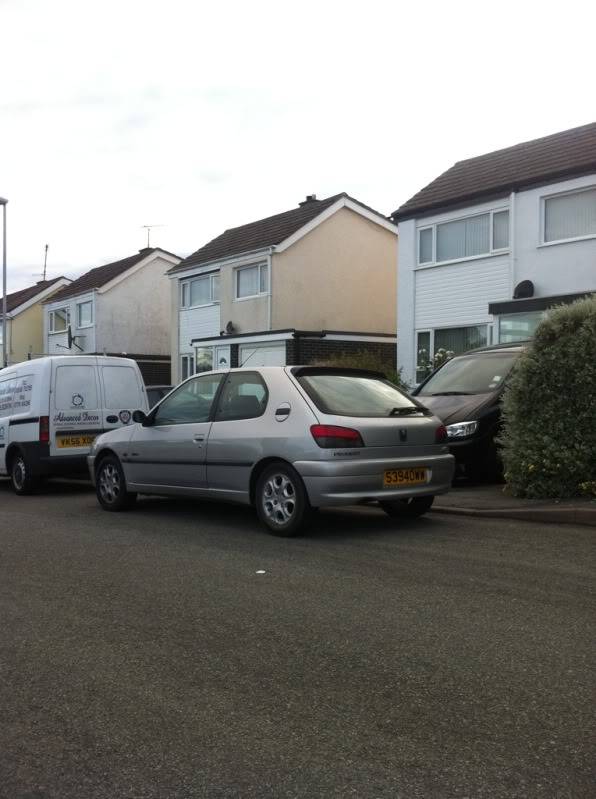 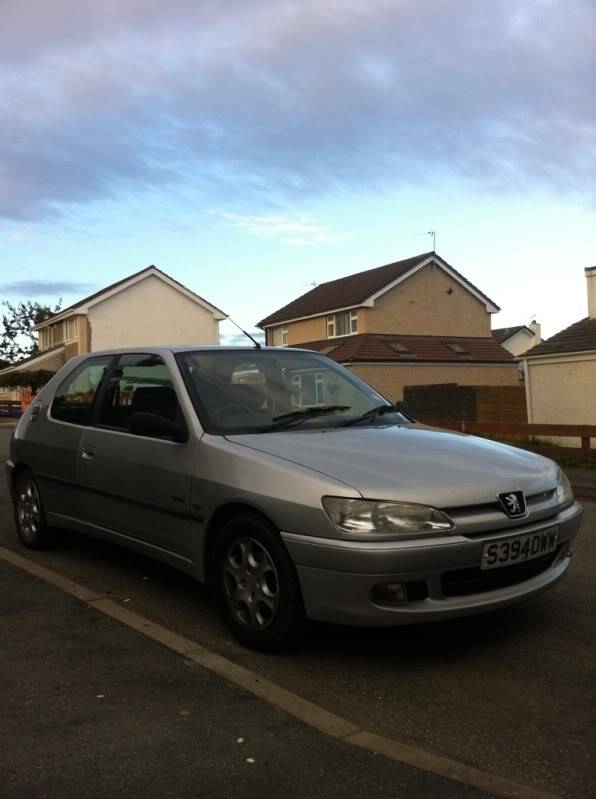 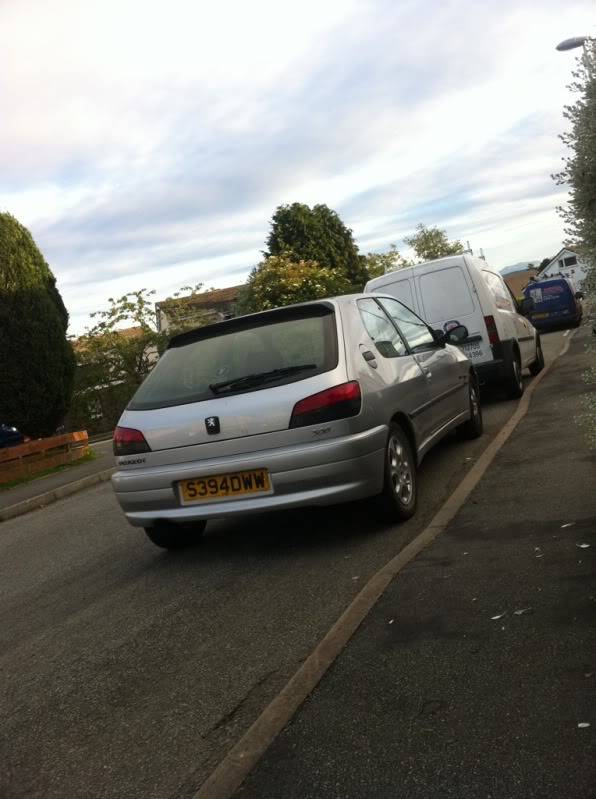 first of all...is it insured? cause askmid says it aint

hmmm, ive just checked aswell, and it says it isnt, although it is, as i changed my insurance over on sat night? god knows..maybe it hasnt been updated, dont they have 2 weeks to do it? i know its ok though, i wont drive it if theres anything dodgy like that... 12points and 3bans later, ive learnt my lesson, if i do anything again now for the next 3yrs i lose my licence, as im sat on 12 points :/

its a 2.0 dturbo, mechanical pump

and thanks pal, will look a bit better once ive tidyed the few bits up and sort out the niggles!!


also, will a gti-6 exhaust fit this, jus from the cat back like, the middle section and back box?

you can make any exhaust fit any car..whilst your there get rid of your "cat" .... stick a pole up it and bash the insides out or cut the cat off and weld a pipe in its place

well this is a full system, including a decat, its a powerflow or summink?

i was told it wouldnt fit? but i thought they would all be the same orta shape, due to body shape etc, jus diff diameters,

may see if i can get it then, make much difference to a diesel?

only thing that may be different is the routing path i imagine or the hangers but nothing which a quick weld cant fix...

If its a 1.9D-turbo u can use a standard phanse 1 front pipe, and your rear box. the phase 1 didnt have a cat, fits straight on and as its standard the mot man doesnt question it

Thats what i did.

the exhaust im looking to get is from a phase 2 GTI-6..and its from the cat back, so jus mid box and rear box? surely that would fit? or will the system sit back a bit to accomodate what would be the longer fannymould :L ??

its a powerflow exhasut see, and im sure it would do world of good on mine, to free up a bit more power!


had another delve into it today, turns out im running without an air filter

so will go and pick one of those up this week sometime, unless i can find a k&n? or again, will that make much difference??

had a play with the pump tonight too, adjusted to fueling screw, and now she smokes a bit

, unsure wether to do it more, but atm im happy...i enjoy throwing it into 4th at 30mph, then flooring it, to create clouds of smoke

been for a spin earlier 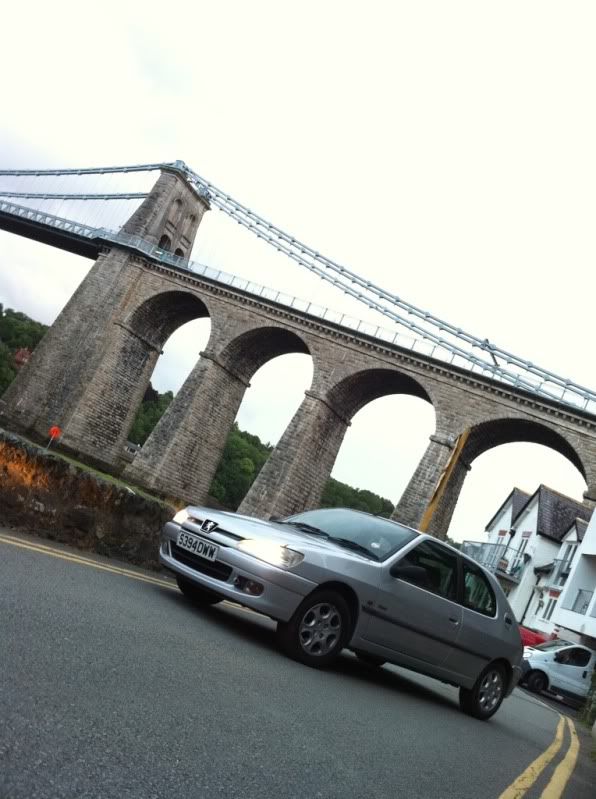 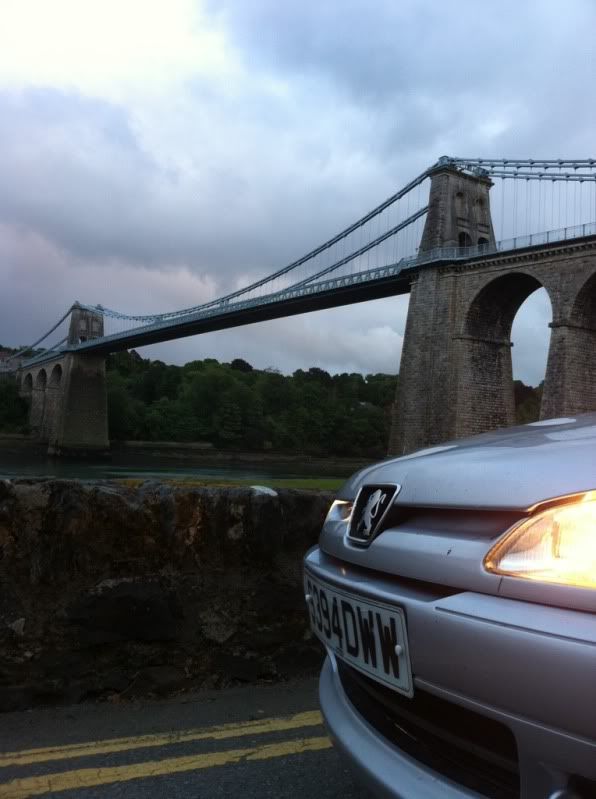 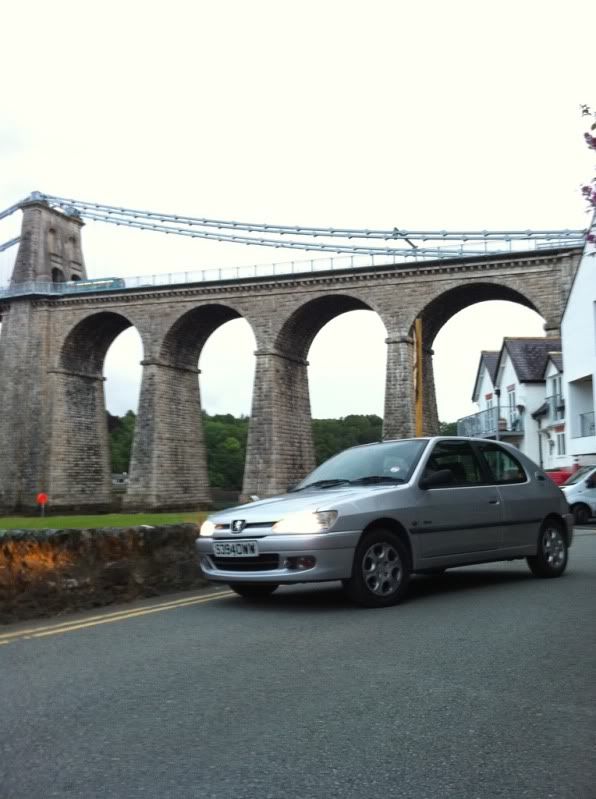 liking the pics by the bridge fella

cheers dude, its a good place for pics, there is a couple more places, but the weather turned S**T, so not a good backdrop

@mark..yea ive adjusted the allen key inside the pump itself, the boost compensator dosent do anything really

just need to adjust the turbo

How far did u turn the screw? I turned mine about half a turn i think it was, more than recomended anyway, it got really gready on fuel so i turned it back 1/4 a trun and it smoked less and went quicker. it'll take lots of fiddling to get it to the right place.

With referance to the turbo mine was just as quick with 13psi as it was at 22psi, i set it around 17psi in the end. It kept cracking blocks and blowing head gaskets then.

i turned it about 45/50 degress...from the imformation i read online, it said no more than 40degress turn like, smokes a fair bit and really pulls in 2nd, just a shame about the gearing as it seems to run out of puff at around 80

i havnt adjusted the turbo yet, i havnt been able to get underneath it, my tools are in midwales and im oop north like

and i also need a boost gauge like, not gna fiddle unless ive got one, it on 175k so dnt wanna go mashing the engine! i was gonna go for around 18psi, as its a slight increase, but nothing to majour then

if you wind the boost compensator all the way in and the max fuel out then it will smoke a lot less, have a look on tdoc uk at jammapic's tuning guide he's running over 200bhp iirc on a xud. 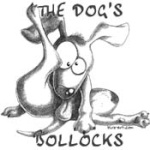 Ah there she is

Glad its doing you well mate, it just was being wasted sat around!

Doesnt clean up bad for an old girl

Cyclones will make it a different car to look at

There are people out there running this sort of power, but without major modifications your unlikely to see more than 120bhp out of a XUD

aye, cheers man, she dosent scrub up to badly tbh.
shame about the repainted rear 1/4 thats really niggles me now, as i can see it all the time when i look at it!

really enjoying the drive of it now, fun car, rear tyres got a slow leak where some idiot put the wheel weight on but pinched the tyre, making a lil hole

it will live though, new rims on this week hopefully

phase 3 bumpers? whats the difference then? are thy silver?

See if someone will do it out of hours

The bumpers look like the ones from a gti6, round fogs etc, just brings them up to date a tad more. The are red, but if you were going to have the 1/4 done it would be rude not to upgrade prehaps

_Mike_ wrote:There are people out there running this sort of power, but without major modifications your unlikely to see more than 120bhp out of a XUD

https://www.youtube.com/watch?v=BALcpKjVKUs&feature=player_embedded
only major mod this guy has made is a hybrid turbo
146bhp at the wheels and 181bhp at the fly wheel.

https://www.youtube.com/user/darrenjlobb#p/u/1/RbpN4XnJg48
this one has had a major rebuild and running compound boost.

mabie not 200bhp but my xsara did 131bhp on the rollers with only the fuel and boost played with.

Jammapic is the guy with 181hp, he has a Hybrid GT25 made by Turbo Technics. Darren Lobb was the guy wiht over 200, 213hp to be precise. But it's now supercharged and turbocharged (compound) and 191hp, as he's having pump problems. Just thought I'd clear that up lol

Nice car you have there 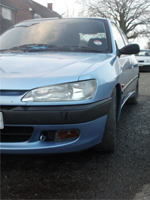 Page 1 of 2
Permissions in this forum:
You cannot reply to topics in this forum
Club Membership
Click above to buy 12 months Club membership for £5 which includes a free pair of window graphics, Please PM Simon stating colour wanted
Log in
Latest topics
» Happy Christmas - 15% Off Everything
by oilman Thu 24 Dec 2015, 23:34